GENERAL MOTORS CENTRE CELEBRATES BUSIEST MONTH SINCE ITS INCEPTION IN 2006 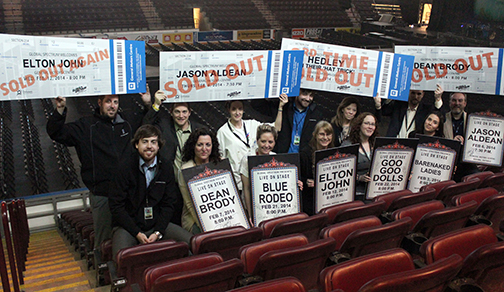 MONDAY, MARCH 3, 2014 - (Oshawa) - More than 55,000 fans filled the General Motors Centre for the 15 events during February, a record for the seven year old Arena, according to Global Spectrum.

The record-breaking month featured Elton John, five Oshawa Generals games, three Durham TurfDogs games, and a myriad of remarkable events in the General Motors Centre. Among the 15 events, there were four sold out concerts including Jason Aldean, Dean Brody, Elton John and Hedley.

“What an unbelievable month,” said Vince Vella of Global Spectrum and General Manager of the General Motors Centre.  “I can’t begin to express how very proud I am of our Global Spectrum team here at the GM Centre. Also, a huge thank you to both Riley O’Connor and Live Nation Canada for their friendship and for being our biggest supporters. I’d also like to thank our community, who without their ticket buying support, this accomplishment would not have been possible.”

The Oshawa Generals family day game played to 6,037 fans where animals, clowns and face painting were present around the concourse. The Generals return to the ice for three home games in March.

Global Spectrum continues to fill the 2014 event calendar with events such as Varekai by Cirque du Soleil which will be coming to Oshawa for eight performances in May. Other special events include: