Spectra by Comcast Spectacor, the providers of Venue Management and Ticketing & Fan Engagement to the Tribute Communities Centre, raised $3,181 to be donated to Canadian Breast Cancer Foundation (now Canadian Cancer Society), Distress Centre Durham, and the Canadian Mental Health Association-Durham. Spectra launched guitar auctions to benefit local charities in January 2017. The auctions consisted of three guitars that were autographed by a myriad of musical artists and bands that performed in 2016 at the Tribute Communities Centre.

“Giving back is a priority for us at Spectra and we are extremely thankful to all those that participated in this initiative to make it a success,” said Spectra’s William Balfour, Director of Marketing and Group Sales. “We had no idea how much the guitars would generate for the charities but are thrilled with the response as every dollar is greatly appreciated by all charities.”

David Hills of Pickering won the pink Fender Squier Bullet Stratocaster Electric Guitar that was autographed by members of Hedley, Walk Off The Earth, Marianas Trench as well as Carly Rae Jepsen and Francesco Yates with a final bid of $1,000 that will benefit the Canadian Cancer Society.

“We are incredibly thankful for Spectra’s donation to the breast cancer cause,” said Kelly Ziger, Community Development Manager, Canadian Cancer Society. “This will allow the Canadian Cancer Society to fund vital research, education, support and information programs that will make a meaningful difference for those living with breast cancer as well as their families. It is only through the support of community members like Spectra that we can further our vision of creating a world where no Canadian fears cancer.”

Kym Baker of Oshawa was awarded the black Fender Squier Bullet Stratocaster Electric Guitar that was autographed by members of I Mother Earth, Our Lady Peace, Five Finger Death Punch, Papa Roach, Sixx: A.M., The Standstills and From Ashes To New with a bid of $1,060 that will benefit Distress Centre Durham.

“The funds raised will be used in support of our online text and chat program that supports youth by providing emotional support, crisis de-escalation and emergency intervention for suicide behaviors,” stated Victoria Kehoe, Executive Director of Distress Centre Durham.

Spectra is always giving back when they can in Oshawa and the Durham Region. Spectra regularly works with charitable organizations for fundraising and special events, they organize their annual Touch-a-Truck event and their Durham Central Adult Hockey League hosts food drives and diaper drives to name a few. Spectra has also started collecting autographs on another guitar that will be auctioned off at year’s end similarly to the three from 2016. 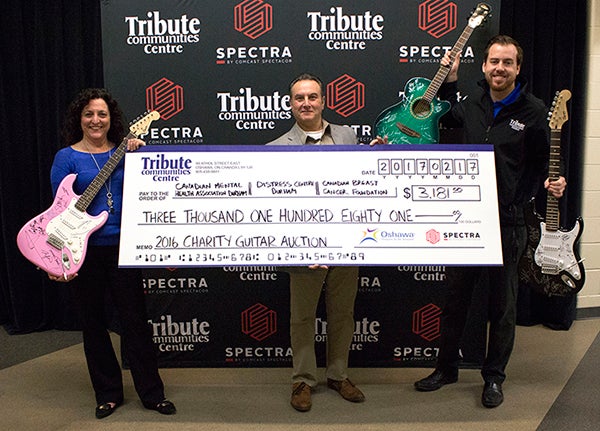